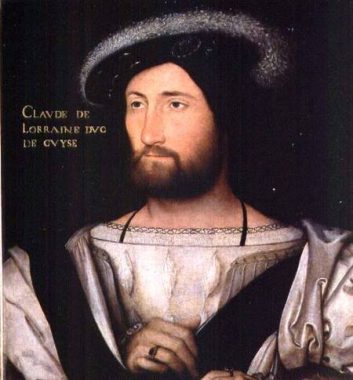 Neither Henry VIII or England nor Francis I managed to garner enough votes in the 1520s to become the next Holy Roman Emperor. But neither man let that disappointment get in the way of a big party. Together with their wives, Catherine of Aragon and Claude of France, the two met in a spectacular summit that squeezed out the new Emperor, Charles V.

Held in June of 1520 between the English occupied town of Guines and the French held town of Ardes, the two monarchs used the meeting to foster an Anglo-French alliance that would effectively squeeze out Catherine’s nephew, Charles V. Although Charles did his best to talk Henry out of going through with the meeting, Henry and Francis’s shared sour grapes convinced them to meet.

Neither Catherine, Henry’s first wife, nor Claude, Francis’s first wife were the party throwing kind. Each Queen knew their duty to provide hospitality, but both were quiet and self-effacing. As a matter of fact, Claude spent most of her married life at Blois, enduring her numerous pregnancies and supervising the building of what would be called the “Francis wing” of the chateau. The summit is one of the few instances of Claude leaving the Loire valley for an extended amount of time.

Henry and Catherine were happy at the moment, and while Henry had just snubbed Catherine’s nephew in favor of Francis, she was determined to maintain close ties with Spain. Because of this fact, she was not pleased with Henry’s decision to betroth her daughter Mary to Francis’s eldest son. Like Claude, she knew her duty and she accompanied Henry during the festivities. One of the main events that month was the formalization of the betrothal between the two young children.

On the tenth of June, Francis and Henry dined with each other’s spouses during simultaneous banquets. Each king’s arrival announced with the firing of signal guns. Francis’s banquet with Catherine was delayed for a while because he kept stopping to kiss the ladies at the event. Henry must have been better behaved with Claude because there are no records of his outrageous behavior.

The pageantry and expense of the June meeting meant that it is the best known meeting between the two monarchs. This would not be their last in person meeting, however. In 1532, Henry met with Francis in order to solicit his help in getting rid of Catherine. That story will be covered in a later post.

Before you go, download a FREE copy of Safe in My Arms, a Three Graces story.