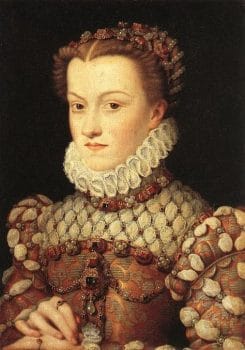 The son of court portraitist Jean Clouet, Francis began his own painting career at the French court in the 1540s. While his father served Francis I, Clouet has the distinction of serving Francis I, Henry II, Francis II and Charles IX until his death in 1572.

I like to call Francis the “yearbook photographer” of the court because in the fifty-plus chalk portrait drawings, he recorded the images of the people of the royal court. For most of these people, his drawings are the only likenesses we have of them. In fact, the only images of Charlotte de Sauve are attributed to Clouet. His “masterpiece” is the portrait of Elizabeth of Austria that hangs in the Louvre. His other works are in the Bibliothèque nationale de France, Paris, the Musée Condé, Chantilly, and the British Museum.

I initially thought that these chalk drawings were initial portraits that he presented to wealthy patrons for their approval for a final portrait. Many of them would have been abandoned due to a customer’s inability to pay for a final portrait, or the fact that the customer did not like how Clouet drew them. Later I learned that these drawings were in fact a final work, and that the members of the court would collect and trade them much like school portraits. Catherine de Medici commissioned several portraits of her children, often using them as a “health checkup” to see how they were faring in their nursery far away from her. She would keep the portraits in a lose folio, and they remained together until the Medici family declined in the 1700s. Later, British tourists to Italy bought the portraits and broke up her collection.

Other nobles would purchase a collection of portraits and put them into a collection of their own. A popular game would have one person hold up an unidentified portrait like a flash card and have the others guess who the person was.

Although Clouet spent most of his career at court, he spent at least a year doing commissions for Claude Gouffier and his wife, Claude de Beaune, the aunt of Charlotte de Sauve. Her portrait, which most consider to be one of his most detailed, is below. 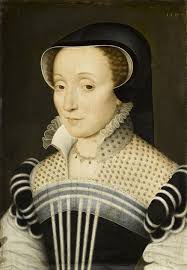