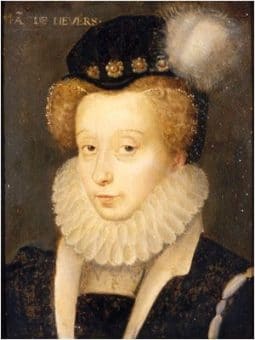 Friendship in a royal court is difficult, if not impossible to come by. In Margot Valois’ case, the women closest to her were Henriette, Duchess de Nevers, and Claude Catherine, Duchess de Retz. Both women were about a decade older than Margot, but given their wealth and high status at court, they were considered to be good companions for the woman who married at the age of nineteen.

Stuck at court with her husband away fighting his fellow Protestants, Margo had very little to do to occupy her time. The presence of two wealthy and well educated women was exactly what the princess needed for a temporary distraction. While the three were equally busy hosting salons, it is the friendship between Margot and Henriette that has garnered more interest from historians and writers.

Margot’s love affairs are legendary, and although in the novel and film adaptions ofAlexandre Dumas’ Queen Margot, Henriette has been equally randy, in reality, the two had very different love lives. Henriette had only one extra marital affair, with Annibal de Coconnas. The very wealthy and very desirable women met Coconnas and his associate La Mole during one of Retz’s salons.

Dumas portrays their heartbreak when their lovers were executed under orders from Charles IX, but in my research I’ve learned that this dramatic story only appears in the Duc de Never’s memoirs. The memoirs aren’t the most reliable source in themselves, given the fact that they were published about 100 years after his death. Still, the image of the two heartbroken women persists in film version of Queen Margot.

During my research, I learned that Henriette lost her son and heir about a month before Coconnais and La Mole were executed, and I decided to include the embalming story as a way to convey her grief at losing her child.

Another story about the women was the rumor that Henriette arranged for the murder of du Gaust, a favorite of Margot’s brother Henri III who made Margot’s life miserable. I doubted that there was any truth to the rumor because it seemed so out of character for Henriette. As I continued my research, I learned that du Gaust was so hatred outside of Henri III’s mignon circle that most historians agree that the men who planned his murder most certainly planned it without any help from either woman.

The did, however, conspire to aid Margot’s younger brother, Francis, duc d’Alecon, to escape to his Protestant supporters right under Henry III’s well dressed-nose. Henriette volunteered her coach for the plan, and with a little switcheroo, the two allowed Francis to virtually walk out of the Louvre.

Margot must have treasured having a friend she could rely on, given how ruthlessly the Valois children plotted against one another. Fed up with the hypocrisy regarding morals at the French court, and determined to do whatever she pleased with her life, Margot continued on with risky romantic liaisons, not caring about the consequences. Neither her husband nor her brother could bully her into doing otherwise.

Annoyed, Henry III decided to strike back at his sister, who was halfway across France in Navarre. Using Henriette as a proxy, he purposefully entangled her in a love affair, hoping that she would incriminate herself in the process. I’ve dramatized the incident, but the conclusion of the “affair” was made very public when Henri III berated Henriette for her supposed “loose morals” in front of the entire court. Henri knew that in order to hurt Margot, hurting her friend was the most effective route.

In my book about Henriette, Margot is often absent in order to keep with the historical record. At the same time, I wanted to show that even when separated, the two remained close friends.

Before you go, download a FREE copy of Safe in My Arms, a Three Graces story.