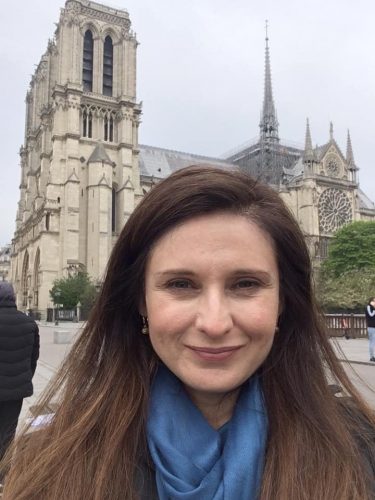 Researching and getting ready for this trip has consumed me since November. Not only was it a MUCH needed vacation, it was my first research trip to France since I started writing historical fiction. Some visits, like to Chateau de Blois and Chateau de Chenonceau, were practically pilgrimages to me. We couldn’t afford to go an extended stay, so I had to maximize my time there.

Because I live in the middle of the United States, I had to take two flights to get to Paris. The first was an hour and a half flight to Charlotte, North Carolina. The second flight was 8 hours, and I tried to employ every dirty trick at my disposal to try to sleep on the plane. IT DIDN’T WORK. 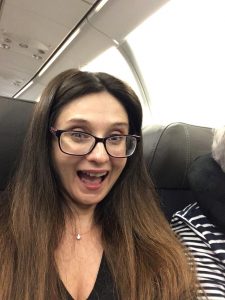 Me struck with delirium after not sleeping through an 8 hour flight.

No matter how hard I tried, I just couldn’t get to sleep. I was so excited the night before we left for the airport, so I was doubly delirious. At least American Airlines had some great movies to watch. By the time we landed at Charles de Gaulle, I had finished the live action version of Beauty and the Beast.

We landed about 6:50 AM local time on a Sunday, so there wasn’t a lot of traffic at the airport, or in the city of Paris itself. We couldn’t check into our hotel until 3 PM that afternoon, so he had a LOT of looking around to to. More delirium…

Our three best bets were going to Notre Dame without a ticket, wandering around the Luxembourg Garden, or finding the flea market we’d seen on the car ride over to our hotel. In the end, my mother and I did all three, but we headed to the Luxembourg first. It was about 40 degrees farenheit in Paris, and it was windy. We were dressed for about 60 degree weather, and neither of us had more than a light jacket on. I had packed sandals, thinking it would get warmer later in the week (SPOILER ALERT: It never did!). 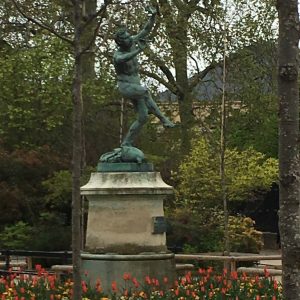 I could have packed a nice winter coat, hat, and gloves for the trip, but I was determined to save as much space as I could in my suitcases for books. As a result, as beautiful as the gardens were, we were friggin cold! 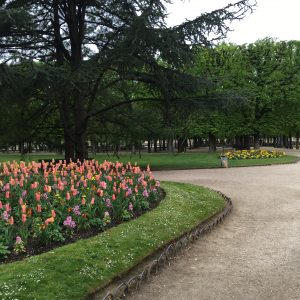 The dark purple tulips in my pictures were the first I’d ever seen before. I loved taking pictures of them. We got our first glimpse of the Eiffel Tower on the walk towards the garden. Now I’m kind of obsessed with them. 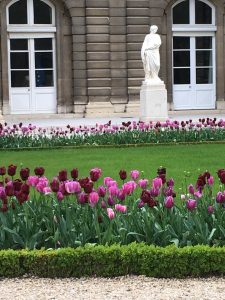 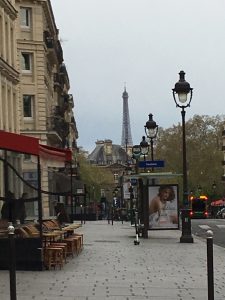 The palace itself was closed, so we couldn’t go in it on a Sunday morning. We walked around it, but truth be told the best pictures I got of it were the tulips inside of the gate. Security was really heavy. We walked to a grotto, which I can’t find a picture of in my pictures. We also had to dodge about 1000 runners who were out for a Sunday run. 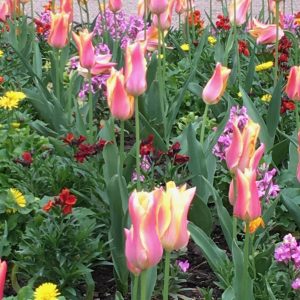 Don’t get me wrong, the Luxembourg Gardens are beautiful. The weather we had that day just wasn’t cooperating. Sunday morning must be the slowest time of the week to visit, because it looked pretty much deserted. Once my fingers turned numb from the cold, we headed back to our hotel to warm up.

Heading out into the cold, Day 1 Part 2

We had a two day trip to the Loire Valley to take and at least two days in the most awesome museums in Paris, so neither my Mom nor I were willing to wear ourselves out on the first day. Since I’d been up for God only knows how many hours, I was not willing to fall over dead. To be safe, we headed out of the hotel lobby once we warmed up and went to the METRO station that would take us to our bus to the Loire early the next day.

That stop was Jussieu, the stop by the Pierre and Marie Curie campus of the Sorbonne. We trugged along, still cold, and did some impromptu sightseeing as we walked. Boy, did we get lucky, because we saw the very same flea market on the walk over to the METRO.

I’ve got to confess: I can read and write in French pretty well, but spoken French just still gives me fits at this point. As a native English speaker, the words don’t look and sound the way I think that they should in French. Plus, as an itrovert, I’m not too keen on improving when I speak. I like to think and carefully compose things beforehand. This trip changed that for me. My mother speaks exactly no words of French. After the trip, she knows “Sorti,” because we kept looking for that sign on the METRO for a solid week. Also, French numbers get freaky after about 60 or so, so I’m not that confident past about the number 14.

Guess who’s mother decided to haggle? In French? KMN. We did, and we really had fun doing it. I managed to learn how to say “aluminum” and “ceramic” in French because my mother bought a bunch of teacup “demitasse” saucers and wanted to know what I spoon was made of. I got a great hardback on the Renaissance (written completely in French, of course!). Okay, the first day was so much fun that it really set the tone for the rest of the week. I started speaking French with native speakers, (plus a lot of pidgeoing) and it didn’t take long for me to stop beating myself up over my poor ability to manage spoken French on the spot. 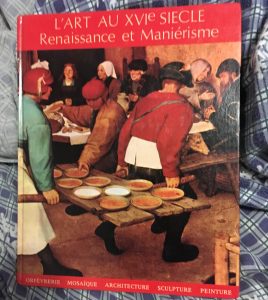 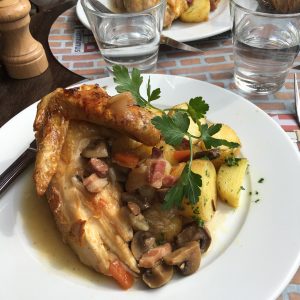 After the flea market, we were getting close to our 3pm check in time, but we still had to eat lunch. I had a great baked chicken with some of the best yellow potatoes I’ve ever had. While we ate, I decided I wanted to walk along the Seine and look at Notre Dame. The fire happened about two days after we flew back, so I’m saving my time at the cathedral for the next post.