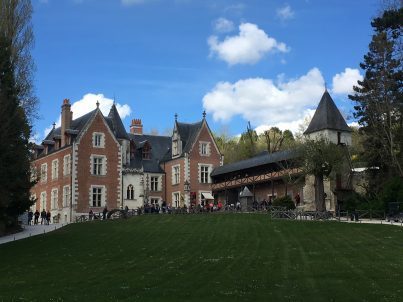 I linked news of this controversy in my newsletter, but as I dug further, I knew I had to write a blog post about it. I’m still working on my blogging about my own trip to Close Lucé, but I’d like to think that this counts as “unusual circumstances.”

Full disclosure: during my graduate school days, I got a full dose of the controversies surrounding preserving and interpreting historical landmarks. This man beat me into submission, and we spent hours debating what to do when a landscape has features of several distinct time periods. To over-simplify hours of nerdy discussion: if your site has existed for centuries, it will have changed so much over time that not all of it will conform to a particular time period. You then have the choice of showing that evolution over time or scrapping elements (often buildings and furnishings) that don’t conform with your time period.

As Close Lucé stands today, it depicts what the owners think the chateau looked like during the three years that Da Vinci spent in Amboise. By the time he got to France, he was an elderly man, and Francis basically gave him a place to spend out his last years in comfort and away from prying eyes and critics. Built in the 1470s, the chateau housed Anne of Brittany, Francis I’s sister, Margurite, an assortment of Francis’ mistresses and some of Henry III’s mignons over the years. 2019 marks 500 years since the Renaissance came to France, and the country is pulling out all of the stops to use it in their tourism marketing. France being France, there’s more than the usual arguing going on about how to display their own history.

At least three rooms, which prior to 2017 were decorated in an Eighteenth Century style, have been gutted and transformed to a representation of what the owners think the rooms looked like in 1516-19 when da Vinci was the primary resident of the chateau. The chateau isn’t the first cultural institution that’s been tangled up in international controversy, but in this case it seems CLose Lucé’s wounds are self-inflicted.

I went to the chateau in early April, 2019. I had no idea that there was any controversy surrounding the site, period. If it was simmering at the time, the staff did a great job of covering it up. The extant buildings are incredibly small. We went well before the tourist season even started up, and the small rooms were packed. I loved the exposed brick of the walls, and to be honest I had no idea I was walking around in what some critics call an “amusement park.” That’s a slur comparing any artificial depiction of history as historically accurate as a Disney ride. The term is “Disneyfication,” and historians really lose their minds over it. Honestly, I kind of feel like a sucker because I didn’t detect any deception on their part. 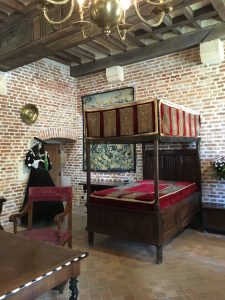 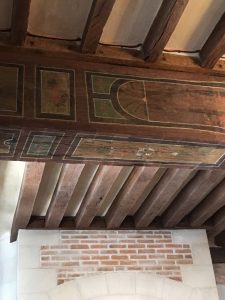 Beams in the ceiling. I’m kind of a beam aficionado.

There are two rooms depicting “typical” bedrooms of the early 16th century, a salon/ dining area, an attached kitchen, and some smaller rooms that were probably a study and closet that are now being used as a theater presenting da Vinci. 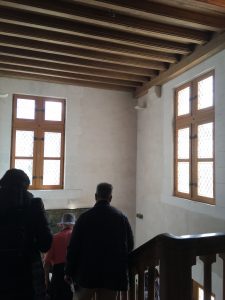 The room that’s causing the most anger is the “workshop,” which critics are calling a “whimsical imagining” of Leonardo’s workshop. I think “workshop” is French for “A load of fake crap,” but you lose a little bit in the translation.

At the basement level, you can see several reproductions of da Vinci’s inventions, which was really fun for me. 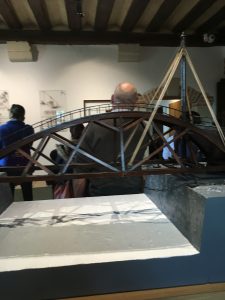 The highlight of the basement, however, was the underground tunnel that supposedly Francis I used to come from Amboise to visit. 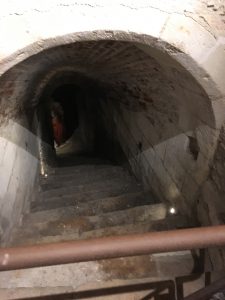 Enough gratuitous pictures. I’m still trying to research the laws regarding preservation of properties in France. In the US, the National Park Service (Dept of the Interior) lists properties on the National Register of Historical Places if they meet certain criteria. If you take a wrecking ball to a property on the list, you can get de-listed and lose tax and other protections that come with being on the list. The criticism of the changes made to Close Lucé fell into two broad categories.

I’my usually on the “purist” side of the continuum. If don’t want to see anything that’s authentic. If it’s not authentic or at least extensively researched, please do me the courtesy as a visitor and researcher to tell me as much before I go into your site. Close Lucé failed to do that, and in that sense I feel as if I’ve been duped. I don’t know at this point what happened to the 18th Century furnishings that were removed to make the “Leonardo rooms.” I hope they’re somewhere safe in storage. They’ve been removed, damaging the integrity of the site, and in that the site has been irrevocably damaged.

If the renovated rooms were created with carefully studying floor plans of the period, and had some of the interpretive text (in French or otherwise) had told me that this was an approximation, I don’t think I would have been as bothered with the switch. I’m writing this in early May 2019, so things still have some time to work themselves out. I’ll try to come back with updates as soon as I can find them.

Before you go, don’t forget to pick up my free book, Safe in My Arms: A Three Graces Story.