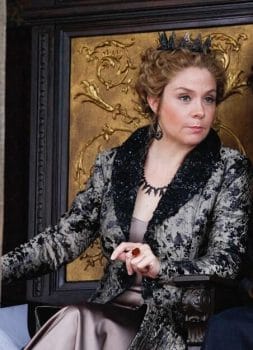 Please don’t mention this to my thesis committee, but I really love watching cheesy, historically inaccurate dramas.  Hear me out before you clutch your pearls.  Like many historians, I grew up watching a “historical piece” that was so entertaining that I had no idea that it wasn’t based completely in fact.

In my case, I got hooked about twenty years ago watching the miniseries Young Catherine with Julia Ormond.  I was OBSESSED with history after that.  Before, my historical education consisted of drawing letters to definitions with my pencil while the assistant football coach who taught the class tried to keep the rest of the kids from tearing the schoolroom apart.

At a very tender time in graduate school (the summer I worked at a historic house home before starting my coursework in the Fall, I ran across what may be the most awesomely cheesy musical ever produced- 1776.  Every year I watch this as a tradition.

I suppose that’s why I don’t get all bent out of shape when it comes to depicting historical accuracy in period films.  I discovered the fun of historical fiction years before I went straight and all anal retentive.  Had I any sewing skills or a membership in the SCA, things might be different.  I think when it comes to enjoyment of a story, I’m a viewer first and a historian second.  Hell, even if the show is panned, I’ll give it a try.  Part of it is the girlish desire to see the costumes, part of it is the entertainment factor.   Yet even I have my limits.  If I have to sit through one more production that relies on punk motifs, I will go insane and take all of you with me.

When it comes to dramas loosely based on the Renaissance, I just can’t help myself.  I’m drawn towards them like aturkey towards glitter.  Witness Drew Barrymore’s retelling of Cinderella based loosely during the reign of Francis I of France.

None of the historical personages are even remotely based on who they actually were.  “Prince Henry” would go on to marry Catherine de Medici.  I have no idea which of Francis’s wives the movie portrays.  Claude was so drained from her dangerous pregnacies that she barely appeared at court.  Second wife Eleanor of Hapsburg was completely maligned despite her work to win Francis’ freedom from Spain.

We can debate all day over the particular merits of one production or another.  Effective storytelling is very different from making sure ever brick that leads to a historical outcome is important enough for an audience.  The brick builidng can be tedious and will cause an audience to walk out of a theater from boredom.

Frankly, trying to find any accurate aspects of history in a movie that cuts corners of extremely large budget on costuming is the road to madness.  When I write my own novels, I stick to the facts as closely as possible.  I don’t really care to deviate from the historical record to imagine a “what if.”  In my case, I’m a one person production and I don’t need to worry about making practical and creative compromises with the people working on my project. Film producers and directors don’t have that same luxury.  For that reason, I’m willing to cut historical films some slack.