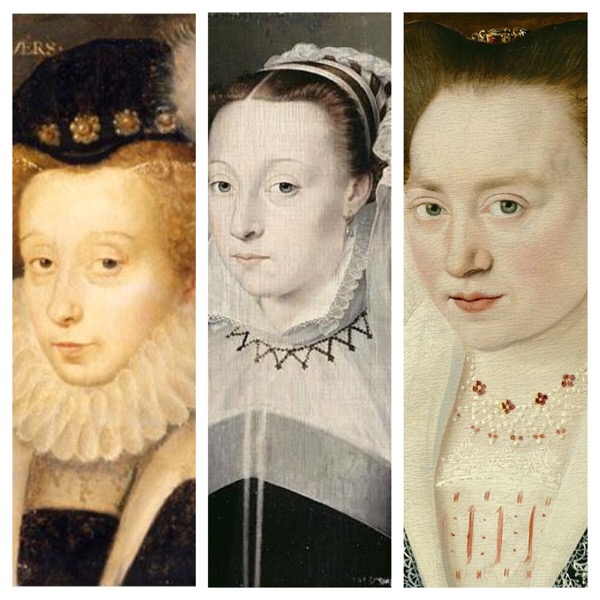 Meet the characters of The Three Graces Trilogy

Meet the Cleves sisters and the people who made their lives.  If you’ve read the Three Graces Trilogy, you’ll find several familiar names

Youngest sister, Marie, is the Princess de Conde.  While the title may sound impressive, the marriage (and the husband who came with it) was not.  Marie tries valiantly to keep her arraigned marriage together, but her husband is determined to do all that he can to distance her from her Catholic sisters.  In-laws can be a headache, and Henri is no exception.  A chance meeting leads to a chance for Marie to find true love, but will she take a chance to pursue it?  Duty and love divide her heart, and Marie struggles to make the right decision.

Eldest sister, Henriette, has her hands full holding her family together.  If she can produce a healthy heir, she may create a dynasty that will spread across Europe.  After inheriting her brother’s debts and his title, with her own two hands she has created a fortune that makes her the richest woman in France.  Now all she needs is an heir to ensure that her assets don’t revert to the crown.  The civil war ripping France apart means that there’s no guarantee that she and her husband will back the right man.  Will Henriette make the right decision, and ensure that their title will be her legacy?  Or will she lose it by joining the rebellion headed by her own charismatic brother-in-law?

Trapped in the divisions caused by an unstable monarch, middle sister, Catherine is the powerful Duchesse de Guise.  The Guises may have everything, but can they manage to keep it all?  Her husband has committed himself to the Catholic League, which opposes the King’s policies at every turn.  The Guise refuse to swear loyalty to the King of Navarre, Catherine’s own Protestant first cousin.  Will the Guise survive the French Wars of Religion?  Will anyone?

Don’t forget to get the entire Three Graces series by downloading your free copy of Safe in My Arms, available here or use the form below the post.