Places of the French Renaissance: The Tuileries

Back in the Middle Ages, the site featured a tile (tuile) factory, and the name stuck over the centuries. It took Catherine five years to complete the purchase, and as she traveled across France with the newly ascended Charles IX, she kept updated on the details of the transaction. Marie-Catherine de Pierrevive,l dame du Perron, supervised the construction, bluntly keeping her appraised of what was going on. One of her most frequent complaints was the lack of money going towards the new purchase. 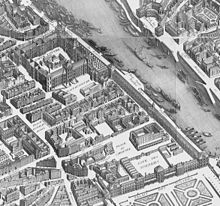 Legends about about the Tuileries, and like most concerning Catherine, this one features Nostradamus. According to the legend, he warned her that she would die near Saint-Germain.” Since the Tuileries was near the Church of Saint-Germain-l’Auxerrois, Catherine used this vague prediction to stop the building plans that included up to five courtyards. After St. Bartholomew’s Day, she abandoned the idea of living at the Tuileries and abandoned it for the Hotel de Soissons.

Years later, Catherine de Bourbon, the only sister of Henry IV and known as Madame, would take up residence at the Tuileries. Granted the freedom to worship as a Protestant at court, she used it as her Parisian residence.