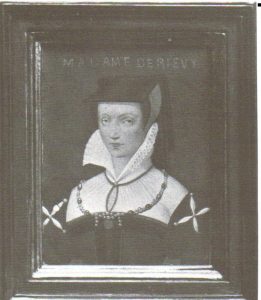 Portraits assumed to be of Renee de Rieux.

Marie, Princesse de Conde was not the first woman to inspire a fit of passion in Henry III. Before the two met, Henri had an affair with Renee de Rieux, who would go on to become infamous at his court.

Renee’s father left a successful career in the church as a bishop before his elder brother died childless, cuasing Jean Rieux to leave the church to ensure the survival of the Rieux family. After marrying a widow with five children, the two would have four children of their own, including Renee. Once Renee came of age, Catherine de Medici, requested that she come to court to serve as one of her ladies in waiting. Fearing the licentiousness of the court, Jean refused, but after his death, his widow was more than happy to send her daughter to court.

The fourteen year old Renee arrived at the Louvre to replace a member of Catherine’s Flying Squadron who had made the mistake of bearing a child with her intended lover. Before long, she had rejected one suitor and started to entertain Filippo Strozzi, one of the Queen Mother’s first cousins first removed. Storzzi soon left court to go to battle, leaving a bored Renee. Before long, Henri, Duc d’Anjou came to attend his mother, who unabashedly considered him her favorite. Some historians accuse Catherine of directing Renee to become Henri’s lover, starting in 1569.

The two became inseparable, with Henri hiring Desportes to compose verses to Renee, as he would later do for Marie of Cleves. Flattered, Renee started to dream of a life as the mistress of the King’s younger brother. At the same time, she would indulge in fits of jealousy, with her envy spilling over once Marie of Cleves caught Henri’s eye. When Marie died before Henri could make her his queen, Renee must have been convinced that Henri would make her his queen. Instead, he chose the quiet and timid Louise of Lorraine, her opposite.

A thorn in the side for the Queen of France

Renee took out her anger at the new queen, going so far as to wear a gown strikingly similar as Louises’ during a banquet. Louise let out a rare fit of fury of her own at the insult. Catherine realized that her lady in waiting was little more than trouble for her favorite son, and started casting about for a husband for Renee. Given her reputation, few men were willing to marry her, so she made her own choice of another Italian.

The marriage was rocky from the start. Queen Louise accumulated new ladies in waiting, each more beautiful than the last, which her husband never failed to notice. Her marriage came to an abrupt halt in 1577, when she found her husband in bed with another woman and viciously stabbed him to death. Henri refused to imprison her, instead sending her to exile in the provinces for a few weeks. Upon her return, she met and soon married another man, Philippe Altoviti, a sailor from Marseilles. The two married in secret and soon were in Marseilles, touching off rumors that she had been kidnapped. Henri went to her defense, writing her to see if she was alright. Assured that she was safe and happy, he later made Philippe Altoviti the Baron de Castellane and later governor of Marseilles.

In nine years of marriage, the two had five children, with Altoviti dying in a duel, reportedly at the hands of Henri’s bastard half-brother. Overcome with grief, Renee retired to her estates in Provence.