My biggest beef with the way most of us are taught history is that we just hit what I call the “highlight people:” the few who made a lasting impression and just skip over whomever Professor So and So thinks is just not that important to bring up in today’s lecture.  The Simpsons lampooned this tendency in the “Caretaker Presidents skit the kids put on for Springfield Elementary.

We do it all the damned time as history teachers.  I spent about a week listening to the man I was a teaching assistant for wax on about “TR” or Teddy Roosevelt.  We could’ve made it past World War II in our survey class if he’d stop going on and on about how important old “TR” was to US history.

Since I got out on my own and became an independent historian, I decided that I wanted spend my writing career looking at women who got the short stick.  Imagine you’re a Frenchwoman living in the time of Francois II, Charles IX, and Henri III.  That’s over thirty years, a lifetime for most people who lived during the Renaissance. 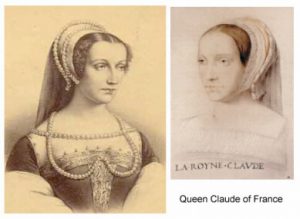 Even within the smaller scope of Renaissance history, poor Queen Claude gets the short stick.  She’s not as evil as Catherine de Medici, or as sexy as Queen Margot.  No one ever accused her of lambasting her husband in front of the entire court like Marie de Medici did on a regular basis to Henry IV.

Using my prerogative, I decided to give Claude her due.  Anyone can see that she had to do more during her lifetime than just sit at Blois, waiting for each pregnancy to be over.  Nonfiction writers and bloggers are willing to give her a spotlight for what she accomplished during her tragically short lifetime.  If nothing else, the influence the French court had on a young and impressionable Anne Boylen calls into question what part Claude played in forming the future Queen of England.