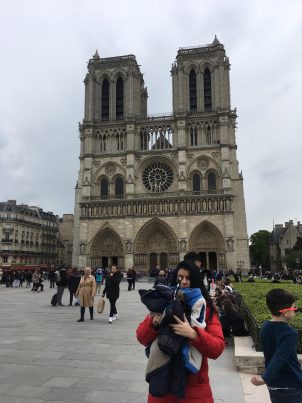 I covered the rest of day 1 of my trip to France in the last post. To catch you up, I’m still on day one because the second half of the day I went wandering on my own to Notre Dame. This wouldn’t have gotten much of a mention, but two days after we flew home to the US, Notre Dame’s roof and spire were destroyed by a massive fire. So, I guess I’ll spend some extra time on my trip there.

My Mom’s feet were getting tired (she’s in her seventies, so I cut her some slack), but I didn’t want to sit around for hours in our hotel’s lobby before check-in time. I wanted to do some wandering myself, so I figured I’d walk and see how close I could get to Notre Dame on my own. Back in 1999 (a few months before Princess Diana was killed), we were in Paris for about two days. We visited Notre Dame back then, but that was decades before I made the decision to write about Renaissance France, so it was a tourist attraction to me at the time. 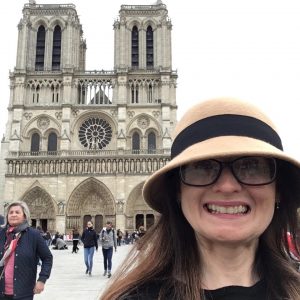 I didn’t have a ticket to go in, and since I wanted to scout the landscape around the church without tiring myself out the first day, I stayed outside and people watched. I know you’re screaming at me about a missed opportunity, but had I known at the time that the church would burn days after I left, that would make me an accomplice. I have no desire to rot away in a French jail, so….

I’ve written two accounts of the beyond strange wedding of Henry IV of France and Margot Valois, which took place on a platform outside of Notre Dame in order to appeal to the groom’s Protestant sensibilities. Years later, an over the top memorial to the slain Duc de Guise was held within the church. It was “the People’s church,” and not a royal chapel or cathedral where the royal family and nobles held many ceremonies. I wandered about the grounds for an hour or so, sketching out where the platform would be when Margot and Henry had their doomed wedding ceremony. 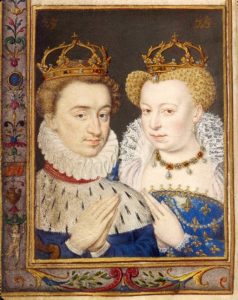 Henry of Navarre and Queen Margot

Side note: I almost made it to Sainte Chapelle, but it looked deserted and I assumed they were closed for the day. Missing it was my only regret of the day. I assumed I could just walk in, but no… 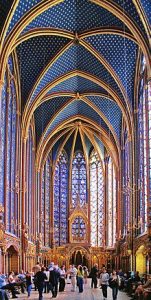 I toyed with the idea of joyriding the METRO, but we had 5 day tickets, and we were planning to use all five days later in the week. Plus, the cathedral was so close to our hotel that there were literally no METRO stops between them. Walking it was.

I found some beautiful trees in bloom at the south side of the cathedral. I’m no tree expert, so I have no idea what they’re called. My mother is dying of embarrassment as I type this. 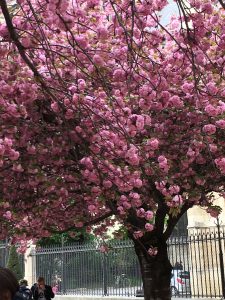 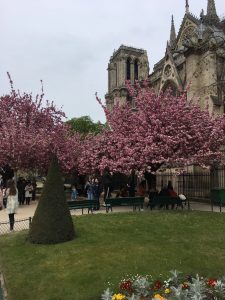 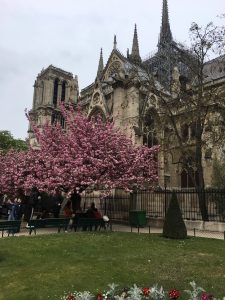 I had heard that the area around the cathedral was tacky souvenir heaven, so I had to head over to the Left Bank to check them out. I found plenty of miniature Eiffel Towers (but not a lot of Notre Dames, I bet those stalls are overflowing with those things now). I looked at the books, but there were precious few that covered the Renaissance, or that I didn’t already have in my library. I also found some great giclé prints of Paris. I was tempted to get them, but I wanted to see what they had in the Loire Valley. One day when I get Oprah rich, I’m going to have a writer’s office with framed pictures.

The stalls, which are mostly green, are locked at night, and the books are wrapped in cellophane so that they don’t get wet when it rains. It rained a few days while we were in Paris, so I can understand why they do that.

After looking at the stalls, I headed down to the quai (wharves) on the river level along the Île de la Cité just below Notre Dame. For the record, it’s 36 steps down and 36 steps back up. I swear, I lost weight during this trip. Doing so meant that I ate pretty much anything and everything in sight. Wile in the quai, I put my feet up and watched the boats go down the Seine. I took a close look at the water of the river, and noted that it was a deep green with a little gray mixed in. I loved noting those details on this trip. One of the things I really wanted to work on was my sensory descriptions, and I love writing about characters absentmindedly looking at their surroundings. 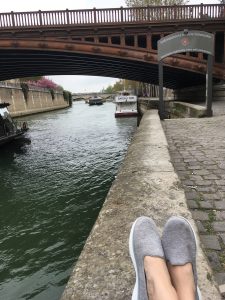 Me kicking back at the quai along the Seine. 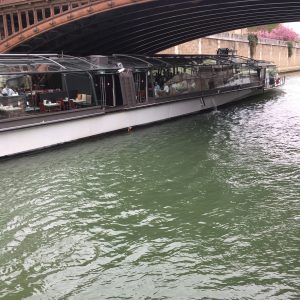 The mix of green and gray of the river.

Sunday afternoon was a nice time to just relax and kick back before we got up with the chickens the next morning to head over to the Loire Valley. We went with a bus tour, which was the best option for taking myself and my mom. If I were going by myself, I probably would have rented a car and gotten lost one kilometer outside of Paris. Next time, I’ll tell you all about the mad dash to the bus.

Before you go, make sure to download my free story, Safe in My Arms here.