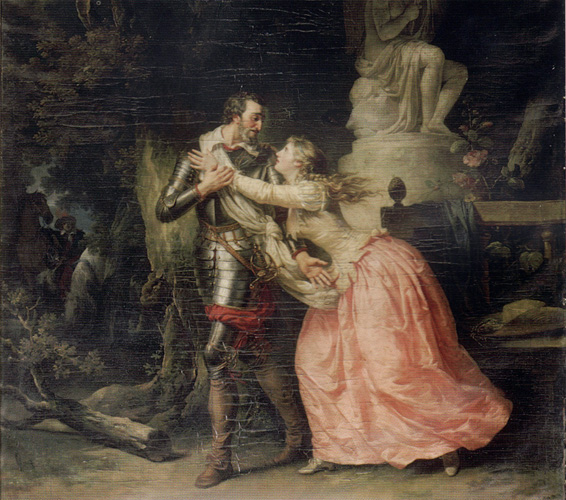 You may be familiar with the story of Gabrielle d’Estrees, the woman who Henry IV loved so much that he eventually agreed to her despite the fact that she had little political clout outside of France and she was already his Baby Mama thrice over.   If Gabrielle is an unknown figure to you, there’s quite a bit of tragedy in her life.  I won’t spoil the story for you, but if you want to get a succinct overview, start with Wikipedia.

Gabrielle is one of Henry IV’s most renowned mistresses, due in part to his decision to make her Queen of France and due in part to the criticism of her over the centuries for grabbing power illegitimately through her presence in Henry’s bed.  She spent a large portion of her time while she was with Henry working as a diplomat to further Henry’s hold on the French crown, but that’s been mostly ignored by historians.  Recently, she’s gotten her share of the credit for her work in securing the Edict of Nantes that allowed Protestants freedom of worship in France.

Archive.org has numerous books in the public domain (which means they’re free to download) about Gabrielle.  Since most of them are so old that their copyright has expired, she’s marginalized in many of those books.  Still, they provide a good introduction into the woman who captured the attentions of a King for a decade.

I’m currently working on The Uncrowned Queen, which tells the story of Gabrielle’s life from the point that she and Henry had their fateful meeting at her father’s chateau.  If you want to know about how to get an advanced copy of the book,  check out the link below this post.  As my thanks, I’ll send a free book.