During the sixteenth and seventeenth century, you’ll hear the word “hôtel” tossed around frequently. If you’re an American like me, your first images will be of something between a Holiday Inn and the Four Seasons. In the hope of saving you from insanity, I’m going to make the explanation of a nobleman’s hôtel as simple as possible. If you want to get into the minutia of the differences of the words “inn,” “hotel,” “mansion,” take a look at this thread. If you’re a linguistics nerd, it’s fascinating. If linguistics is not your thing, read on for a simpler explanation.

Think of a hôtel as a townhouse that belongs to a particular nobleman. The Duc de Guise had one, and so did his sister, the Duchesse de Montpensier. Actually, the one Montpensier lived in belonged to her late husband, but that might be complicating things again. Nobles used their townhouses as their principal residences in Paris and other large cities when they did not live in apartments at royal chateaus while waiting on the royal family.

By the seventeenth century, Paris boasted about 2,000 hôtels within the city. Due to remodeling and destruction during the French Revolution, by the dawn of the Twentieth Century, there were less than 500. A typical hôtel sits away from a main street, behind a large courtyard and in front of an urban garden. Depending on the nobleman, a hotel might have several outbuildings such as an orangerie and stables. In my research on the Hotel de Guise, I learned that at one point there was an orangerie, so I had Catherine, Duchesse de Guise comment on the young troops stationed there.

So many pivotal things happened at hôtels during the Sixteenth century that there was no way to tell their story without placing them in one hotel or another. During the Day of the Barricades, The Duc de Guise turned the hôtel de Guise into a virtual fortress. Several sources say that Catherine de Medici and Henry III were becoming so estranged by that point that she preferred to stay in her own Parisian hotel, the Hôtel de Soissons. That particular building continued to play a part in history, later housing Catherine de Bourbon, the unhappy sister of Henry IV. 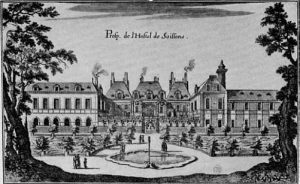 Engraving of the Hotel de Soissons in Paris 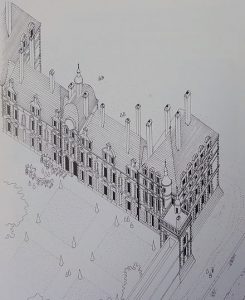 As she was due to meet the man she loved, Marie of Cleves, Princesse de Conde, stayed at the Hotel de Guise to give birth to her only daughter, who she named Catherine. There was a Hotel de Bourbon, which housed some members of the Bourbon family, but to my frustration, I could not learn who took up residence there in 1572-4 during Marie’s story in Almost a Queen.

I did, however, learn that while her husband was away from Paris she stayed with her sister, Henriette, at the Hotel de Nevers. That hotel previously belonged to their father, the previous Duc de Nevers. Marie did some traveling between her married sisters’ homes, so it got confusing at times to pinpoint which house she was in as a guest. Marie’s situation was not that unusual, since part of the “Hôtel” moniker meant that other nobles would stay there occasionally as a guest.

That is your simple guide to what a “hotel” is. I’ve over-simplified some parts in order to keep from overwhelming you. If you want to go further in depth, click on the links in this post. Before you go, make sure you download a FREE copy of Safe in My Arms, which completes the story of the Prince de Conde.