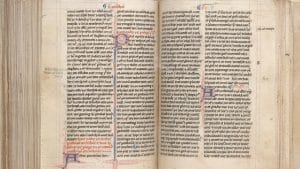 On May 22, 1544, he ordered in inventory of the library at Blois to prepare them for a move to the nearby Chateau de Fontainebleau.  The 1,896 items were soon on the move, arriving at their new home by June 12 under the supervision of Francis’ private librarian, Mathieu Lavisse.    By 1546, the English ambassador toured the new royal library at Fontainebleau as Francis proudly showed his new library to them.  Francis pointed out during the tour (and PR push) that he had commissioned French  translations of the Greek books he had purchased through his agents in Greece.

The library at Fontainebleau grew steadily, even after Francis’ death.  By 1567, it held 3,650 titles.  Scholars were so eager to get their hands on the titles that they petitioned Catherine de Medici to move the royal library closer to a building in Paris.  This would eventually form the nucleus of the Bibliothèque nationale de France. 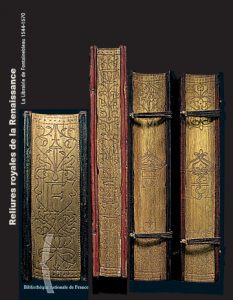 The books that made the trip to Paris must have been glorious.  In the early 1540s, Francis ordered his volumes to be rebound, complete with gold and silver tooling.  Historians argue that while Francis was cost-conscious about the materials he used for the rebinding, during his son Henry II’s rule, the quality of leather and other materials improved.  By 1552, over 600 books featured luxurious binding.

Francis used his books not only as a display of wealth, he was genuinely interested in scholars having access to them.  To that end, he appointed a printer of Hebrew and Latin in 1539 and an additional one in Greek by 1542.  Always true to his nature as a traveling monarch, Francis made plans for a pocket sized New Testament in 1546.  Francis deserves credit for creating three types of Greek type, cut by one Claude Garamond.  Yes, “Garamond.”