In the heyday of the Flying Squadron, Catherine de Medici dispatched two beguiling young women to spy on tow Bourbon brothers, the Prince de Conde and the King of Navarre.

Any time a royal asks a favor there is a danger of disaster, whether the person being asked agrees or refuses the request. In the case of female courtiers, the question of whether to work as part of Catherine de Medici’s female spy network, L’escadron volant or the “Flying Squadron,” carried the most risk. Dig up enough good dirt on the man you spied on and the Queen Mother might reward you and your family. Displease her and you might end up like Isabell Limeuil.

Catherine assigned Isabell to seduce Louis, who was the current Prince de Conde, a political adversary, rival for military appointments against Catherine’s favorite son, Henri III, and a dedicated Huguenot. The politically astute Catherine knew that getting inside information on Conde would be invaluable, so she sent Isabelle to seduce Conde and become his mistress. Jean Plaidy fictionalized Isabelle’s story in her Catherine de Medici trilogy. In The Valois Mistress, I used the hapless Isabelle as a cautionary story for Charlotte de Sauve of what could go very, very wrong for her if she failed in seducing Henry of Navarre. Catherine kept tabs on as many Huguenots and rivals as possible, sending Louise de La Béraudière de l’Isle Rouhet to become the mistress of Antoine de Bourbon, Conde’s brother and the father of Henry IV of France.

Isabelle succeeded so well with Conde that she eventually conceived and gave birth to his son in 1564. She gave birth in Catherine’s own apartments while the Queen Mother was out in the countryside on progress. You might think that a live birth would be proof of success and Isabelle would be rewarded by Catherine. Unfortunately, morals were liquid at Catherine’s court, and while she encouraged her female spies to engage in adulterous liaisons, she was determined to keep an outward reputation of piety at the French court. Yes, you read that right. Catherine was responsible for encouraging (some historians argue arm twisting) women to enter into affairs, but if they drew too much attention to their efforts, they quickly became collateral damage.

After hearing about Isabelle’s child, Catherine banished her from the court. I can’t find any evidence that she gave the poor woman any under the table reward for seducing Conde. Isabelle was reportedly in love with Conde, and after Conde’s wife died, she assumed he returned her feelings and would soon marry her. She must have really been blinded with love for Conde, because she publicly named him as the child’s father. Some sources say that she went as far as to send their infant son to Conde in a basket. Unfortunately for Isabelle, Conde proved to be feckless, and two months after losing his first wife, he married another woman. Isabelle was quickly banished to a convent, where she might have languished for the rest of her life. She married Scipion Sardini, a wealthy banker from Tuscany, who Catherine considered a protoge. The two lived their lives out quietly in Hôtel Scipion, Sardini’s mansion on the Rue Scipion in Paris. 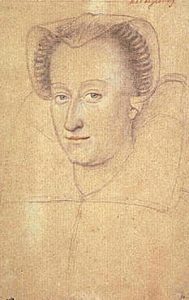 Jeanne of Navarre used the Flying Squadron as political ammunition to denounce Catherine. She wrote to her son, Henry IV of France, to avoid Catherine and her spies at all cost or he would suffer the same fate as his uncle, Conde. Spoiler alert: Henry completely ignored his mother’s advice like any other good son. Isabelle was allowed to escape the convent in 1567, at the age of thirty two. Her son died months after her birth, and had he lived she might have been forced to remain in the convent for much longer. Conde’s son, Henry, married Marie of Cleves, his Bourbon first cousin. When the newlyweds came to court, Marie caught the eye of Henri III. Conde was convinced his seduction was a new plot from Catherine, and given the story of Isabelle and his father, it’s understandable why he assumed the seduction of Marie was another Flying Squadron plot.

Before you go, download a FREE copy of the story of Henry, Prince de Conde here.