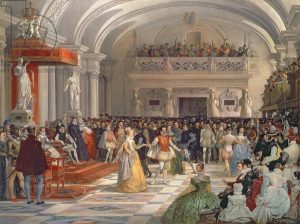 It’s tempting to imagine court life in France as what it was like at Versailles. Louis XIV created Versailles as a new model of court life, one that was very different from that of a courtier during Renaissance France.

Court life was always expensive, no matter what the century. Nobles had vast estates to run, armies to raise, and gambling debts always loomed. Investing money at court was a gamble that only sometimes paid off. By the fifteenth century, France started accumulating more territory, including the Duchy of Brittany, which meant that the court would often take long trips to visit the breadth of the growing kingdom. Usually, local nobles in a region would join the court when it was nearby, and when it became too expensive to travel, they returned home to be replaced by nobles in other regions.

Traveling across France across the seasons

Travel wasn’t easy for the nobles. In the colder months, rivers could often freeze and burst their banks, usually washing away bridges. Once you arrived at where the King was staying, there was little guarantee that you would find a place to stay. Francis I was notorious for staying in remote places in order to hunt, the closest lodgings were either an abbey or an inn. The Prevote d’Hotel, staffed in part by fourriers, gave out tickets for the nobles as they were assigned to them by the marcheal des logis.

In theory, this would work well, but the reality was that far too many of the nobles were out for a place to rest their heads for the night. In December 1539, the court arrived at Loches, with most of the non-influential nobles and foreign nobles left to fend for themselves. Seizing an opportunity, the locals had no qualms about exploiting their situation.

Getting to and staying at court wasn’t easy for even the wealthiest of courtiers.  In fact, they were better off just staying at home and tending their own estates.  During the Renaissance, they could afford to without incurring the King’s anger, but Louis XIV would soon change all of that.